Another Problem Due To Poor Cavity Wall Insulation Practices

I have started to see problems due to the recent upsurge in energy efficiency home improvements. Condensation is starting to become a big issue and dampness due to cavity wall insulation inserted in already venerable properties can also become a problem. I am sure most companies carry out their work professionally and correctly. However, poor practices are still out there and one such property I viewed recently suffered with damp and timber problems due to such poor practices.

The client thought he had a small dampness problem in one room. However following the survey I suggested that an under floor inspection should be made. This was due to a gut feeling and concern I had about under floor ventilation. 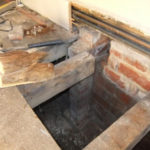 Once under the floor, I discovered a number of decayed floor joist ends, and extensive wood worm.  I was particularly horrified to see that most of the under floor air bricks were blocked with cavity wall insulation. This was not a good sign particularly as the ground (soil) was very damp and subject to 50-100mm of standing water at certain times of the year (I later discovered).

It was fair to assume that without the under floor air bricks working efficiently, air borne moisture levels would build up to a high level putting the joists at risk of decay. The walls even though they had a working damp proof course would also absorb the moisture and over time could show up as dampness on the decorative ground floor wall surfaces. The cavity wall insulation blocking the cavity would also reduce the walls ability to breathe.

The solution was to replace or treat joists and joist ends (two floors had to be completely replaced) and increase under floor ventilation (double the amount of air bricks that are currently there). The air bricks would be sleeved to prevent further blockages.

Call Now Button
We use cookies to ensure that we give you the best experience on our website. If you continue to use this site we will assume that you are happy with it.OkPrivacy policy